Media Type
Image
Item Type
Photographs
Description
To the left is the old Cobourg and peterborough Railroad station (near the harbour) and to the right of it is a storehouse in which theatricals were produced during the Provincial Exhibition of 1855. This location is southeast of Town Hall. The water was either held back from the old creek or otherwise brought in from the lake.
Notes
The sport of curling in Cobourg pre-dates 1859 when an ad appeared in the local paper regarding a meeting for the purpose of re-establishing the Cobourg Curling Club. In the 1860s there were two rinks operating on the Factory Creek pond and a total of seven rinks in Cobourg overall. The first covered rink was on James Street but it burned in 1880. There as another one south of the jail, one on University West, King Street West and then Queen Street where it became the Waverly Curling Club of Cobourg. This closed during the Second World War but reopened in 1952. In 1960 a new rink was built at Division and Elgin Streets and the name changed to the Cobourg Golf and Curling Club. Then in the early 1970s they joined with the Port Hope club and became what is now the Dalewood Golf and Curling Club on Dale Road.
Date of Original
1896
Subject(s)
Clubs
Curling
Sports
Local identifier
796-3
Collection
Historical Photographs
Geographic Coverage
Copyright Statement
Public domain: Copyright has expired according to Canadian law. No restrictions on use.
Contact
Cobourg Public Library
Email:info@cobourg.library.on.ca
Website:
http://www.cobourg.library.on.ca/
Agency street/mail address: 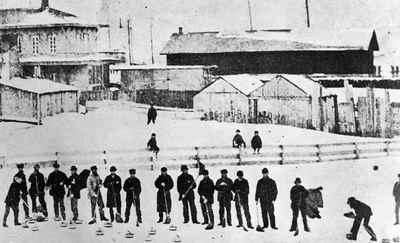